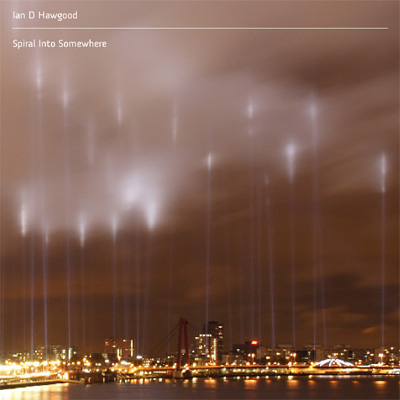 "I close my eyes, earmuffs blocking out the city noise. I have known sadness and I have known hate. I have stared at the darkness and it has just stared right back, knowing a compatriot. I close my eyes a little tighter and start feeling my way blindly back." Ian D Hawgood

Compared with it's predecessor "The Fire Will Die At Night" Ian's new EP comes with a lighter, less dense atmosphere. Soft piano-spots, little melodies from far away and sometimes slightly moving beats find their way to your ear and to your heart. Shifting you back to childhood, when you could enjoy things light-hearted, they flowed to you without any struggle.

Just keep on Spiralling Into Somewhere.

Reviewer: aw. Megalon - favoritefavoritefavoritefavorite - March 6, 2010
Subject: Drone listeners incompatible
I seems I'm not as impressed than my fellow colleagues of life below. Though the ambient tracks itself are of good value, there are a few things that bummed me out, such as the beat that appears on the first track caused it not to enter my mp3 player, the second track's high pitch sound caused the undertone to blend away so now and then making it hard to get a good focus on. The fourth track is mainly piano and that's just not my thing. So the rating basicly goes to the third track which to me sound very appealing.

Reviewer: bimmy - favoritefavoritefavoritefavoritefavorite - January 20, 2008
Subject: personal favorite
I'm not sure why, despite the brilliance of the first release I think I prefer this one (after a month of listening to it). the last track, its basically arvo part or eno 'airports' done very very well. the others just move in such a happy sad melodic way its hard to match or tie them down. at first i got the feeling it was like 'look what i can do' - kind of a nod to his influences, at a guess, eno, arvo part, maybe later people as well (second track) like stars of lid or something. it kind of annoyed me for awhile as the first release was so creative and uniquely voiced - but actually this is just a lovely release playing with ambient genres without care or thought (pianos, strings, xylophone sounds and washed out field recordings) and its got to be one of the most poetic releases of the year from any label.

Reviewer: Framan - favoritefavoritefavoritefavorite - January 1, 2008
Subject: Enjoyable
These are well put together ambient tracks. The foreground instrumentation is composed well but are really only there to set the stage for the audio craftsmanship in the background. Every audition will bring forth a new discovery for the listener.